The salt production season varies annually depending on weather conditions. It usually begins in May and ends in September. After September, the long nights delay the evaporation process and the constant rain spoils the small amount of salt obtained.

During the rest of the year, the salt workers perform recovery and maintenance work on the salt farms, preparing them for the next season. However, the packaging section works all year round, cleaning, packing and labelling the salt.

1.- FILLING THE SALT-PANS
This consists in pouring two to four centimetres of brine on the horizontal platforms to expose it to the sun and wind. This filling process can be performed in several ways, depending on the particular features of the storage wells in each farm. These systems include a device similar to a crane that is known as a "trabuquete" in Añana (a scoop).

2.- CRYSTALLIZATION
Over the next four hours the salt crystallises. This commences when a thin film covers the surface of the brine placed in the salt-pans. Over time, the film breaks up into smaller parts known as Fleur de Sel (Salt Flower). If the salt workers want to obtain fleur de sel (salt flower), they collect it from the surface of the salt-pans using some specific tools that do not break up the flakes. However, if they want to obtain mineral salt, they stir the fleur de sel to sink it to the bottom of the salt-pan and allow all the brine to crystallise evenly.

3.- IRRIGATION
This consists in speeding up the crystallization process by stirring the brine with a roller. In those salt-pans where dry areas have appeared due to surface irregularities, preheated brine is added to avoid interrupting the evaporation process. A tool known as a "regadera" (watering can) is used. This is a bowl with a wooden handle. The brine is heated in small wells where the liquid increases its temperature more quickly.

4.- COLLECTING THE SALT
Contrary to what one might think, the product is not collected when the brine has evaporated completely; it is gathered when there is still some water in the salt-pans. This is done to wash the salt one last time. The harvesting process consists in forming one or two piles of salt in the centre of the salt-pans. Then it is placed inside baskets made of chestnut wood, where it is left for a while to drain off any excess liquid.

5.- STORAGE
Once the salt has been drained in the basket, it is placed in the storage areas in the farms. These areas are mainly located underneath the salt-pans, on the surface of which there are some small holes called "boqueras" through which the salt is poured.

6.- PACKAGIN
GIn October, the salt from the Valle Salado storage areas is moved to warehouses in an operation known as "entroje". In the packaging unit, the salt is cleaned of minor impurities, packaged and labelled. 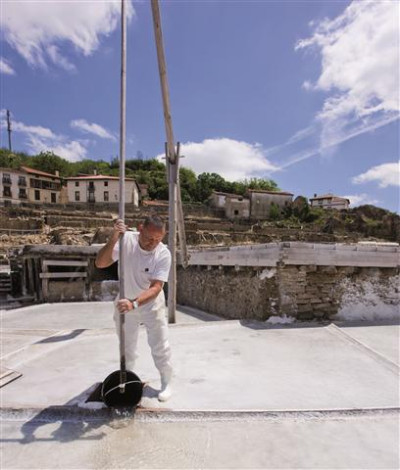 We use cookies for statistics web usage. If you continue browsing we understand you accept this.
I REGRET   I ACCEPT COOKIES    Más información